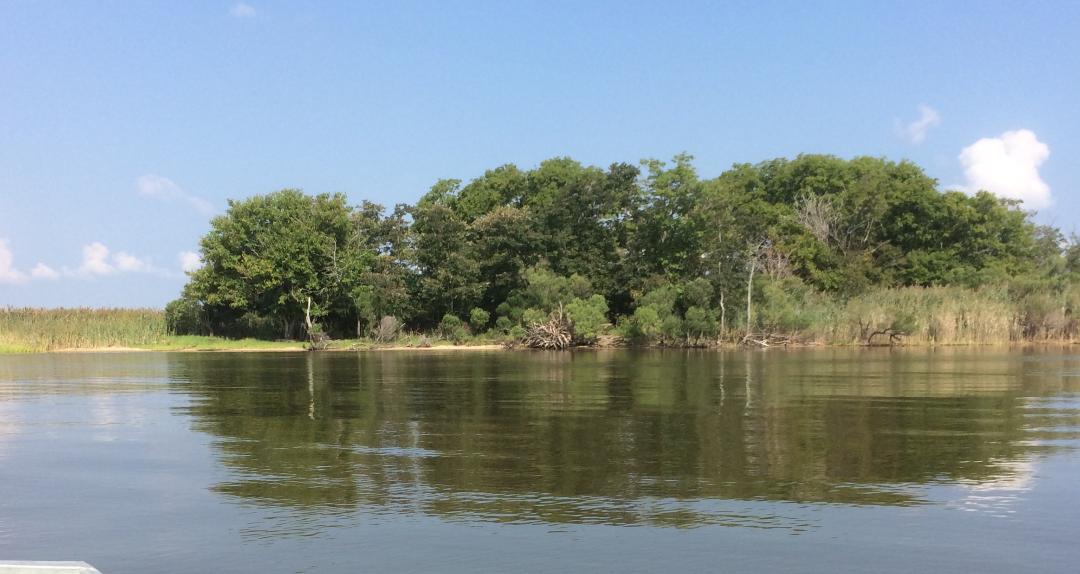 This group of about 300 people are descendants of the original Nanticoke Indians, whose home was, and still is the Eastern Shore of Maryland. Their name, Nause-Waiwash (nah-soo WAY-wash), is a reference to two Nanticoke ancestral villages; one having been located along the Choptank River outside of Cambridge, MD and the other having been located outside Vienna, MD along the Nanticoke River.
Based in Dorchester County, Maryland, the Nause-Waiwash are the remnants of what Europeans call Nanticoke, Choptank and Pocomoke tribes who fled into the marshes in the 1700s to avoid execution.  These three names, Nanticoke, Choptank and Pocomoke, are the names of the three major rivers in the area, which are tributaries of the majestic Chesapeake Bay.
These “Indians” or Native Americans were first “discovered” by the famous Captain John Smith during his exploration of the Chesapeake Bay in 1609, and are well documented in his writings and history books everywhere.

In the late 1980s, someone decided that the history, culture and traditions of these Dorchester County Indians needed to be preserved. That someone was Mr. Sewell Fitzhugh. Mr. Fitzhugh spoke with elders Elihu Abbott, Gilbert Robbins, Lee  Hughes and many others, with their support, Mr. Fitzhugh proceeded with organizing the now Nause Waiwash Band of Indians, Inc. Mr. Fitzhugh said, “We know we’re here. We’ve never left.” . . . “We want the state of Maryland and all to acknowledge they didn’t kill us all, that some of us managed to survive.”

A council was formed and an election was held by the women of the tribe. Mr. Sewell Fitzhugh became the first chief of the Nause Waiwash Band of Indians, Inc.

Chief Winter Hawk led the Nause Waiwash Band of Indians in a positive direction. The tribe prospered and grew by leaps and bounds while under his leadership for 25 years. To date, the tribe has gained over 300 members and counting.

The chapel will be used by the tribe as a long house. Though, it is not the traditional long house, it will be used as a meeting place and for ceremonies. The long house is currently under construction.

In 1992, the tribe held their first Native American Festival on Elliott Island, MD. After a couple years there, the festival moved to Andrews, MD for a year or two and then to Sailwinds Park, Cambridge, MD. In 2006, the festival moved to Vienna, MD.; close to the old stomping grounds. 2018 was the first year the festival had to be cancelled due to impending hurricane Florence.

The Nause Waiwash Band of Indians have contributed to the community by cleaning up old cemeteries that have been neglected, supporting the reconstruction of the American Legion Post 91, supporting the Dorchester Goes Purple campaign, donating school supplies to the Dorchester County Public Schools and also the Johns Hopkins school supply drive sponsored by the Johns Hopkins Legal Department. Members of the tribe have participated in the Linchester Mill Discovery Days and have talked to students in the classroom about the tribe’s history and culture. The tribe is extremely supportive of educating people. The mission of the tribe is, “Pride in preserving our history, enhancing our culture and maintaining our traditions through education; now and for generations to come.”

In October 2014, the Nause Waiwash Band of Indians, Inc. suffered a tragic loss. Chief Sewell Winter Hawk Fitzhugh suddenly crossed the veil while at home with his wife, Kathy. The people of the tribe did not want to see the hard work of Chief Winter Hawk, elders Mr. Elihu Abbott, Mr. Gilbert Robbins, Mr. Lee Hughes and many others fall apart.

In November 2014, the women of the tribe held an election for a new chief. Donna Wolf Mother Abbott was elected as Chief Winter Hawk’s successor and the first woman chief of the Nause Waiwash. Chief Wolf Mother’s goal for the Nause Waiwash is to continue to move forward and to educate.

Colors have different meanings in every culture, and the same can be said for every tribe. These colors are the most important to us, though they may hold different meaning to another tribe.

Prior to the 1850’s the community of Andrews, was once a campground where natives would gather to talk, sew clothes, feast, and sing and enjoy life. In 1855 the first Wesley Chapel was built using wood cut from the local trees by the residents, square- head nails that were donated to the project and hand painted by those that would eventually attend the Native American church.
In 1917, the church was struck by lighting and burned down. Once the area was cleared the residents rebuilt the church in the same fashion, with local wood and donated materials. In 1920 the second church was completed and opened to the public where it continues to stand today.
The Nause Waiwash holds in trust the Wesley Chapel but its attending members, an average of 7, are what keep the building open and in use. Wesley Chapel is one of three surviving churches in the area that display the traditional architecture. Together with the upkeep of the building, the members and tribal community maintain the graveyard where several of our ancestors have been laid to rest.
Today the church remains open to all who wish to attend, and in the hands of the native community.

Community Clean Up Efforts – Every spring and fall the Nause Waiwash selects a cemetery in need of preservation. We then choose a day, typically around Earth Day and Native American Day, where we gather to pick up trash; trim hedges, cut back trees, and conduct general maintenance. We do this to be give back to our community and thank them for their continued support throughout the year. This also honors those who have crossed over the veil.

Holiday Adoption – During the Thanksgiving and Christmas season, we choose a family in need to provide food, gifts and supplies so that everyone may enjoy the holidays. Our selection process is based on anonymous nomination from the community.

Educating the Youth – Several times a year, the members of our tribe are invited to schools, seminars, camps, and reenactments to educate the younger generation and public. We speak of our culture, history, beliefs, and skills. We have spoken at Linchester Mills, Horns Point, Elementary, Middle, High schools and Colleges.